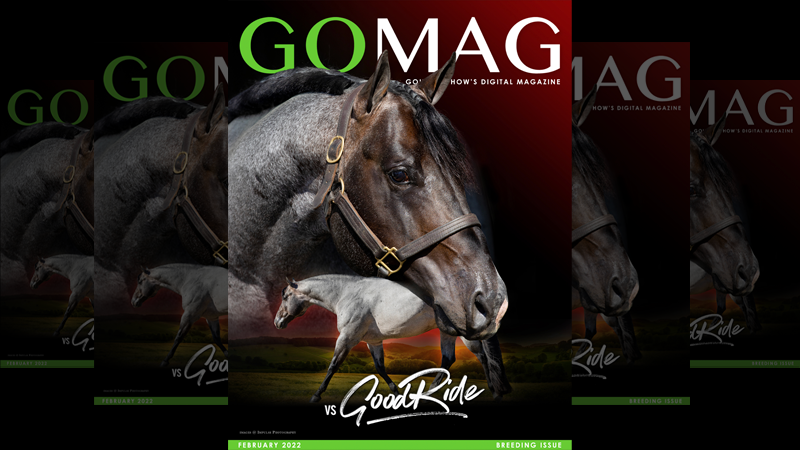 Love is in the air. Go check out the February Breeding Issue of GoMag now!

CLICK HERE to view the February Issue of GoMag

Congress and World Champion VS GoodRide is featured on the February cover of GoMag. The 2019 NSBA Horse of The Year is 6-panel negative and homozygous for the black gene. While he is retired from the show arena, his offspring are starting to make a name for themselves in the show ring. Owner Brenda Gower of Lloydminster, Alberta, says that “Boss” has been stamping his foals with many outstanding traits. “His foals are big-bodied, have nice temperaments, are highly trainable, slow legged, and have an awesome front leg,” Gower states.

Trainer Jason Martin of Highpoint Performances Horses agrees, “I love how pretty and well made his foals are, and how he is passing on his flat front leg.”

VS GoodRide is currently standing at Highpoint Performance Horses in Pilot Point, Texas. This 2015, 15.3H bay roan stallion is by proven sire, VS Flatline, and out of World Champion and World and Congress Champion producer, Goodygoody Gumdrops. Some of his outstanding offspring include VS Good Vibes, which Ray Arnona recently purchased under the guidance of Rusty Green. Also, Howbout A GoodRide, Eight Second Ride, Ryde, and Gumdrop Good are offspring that had tremendous success last year in the show pen. Additionally, last year at the Congress Super Sale, two of Boss’ daughters were sold for impressive prices, including GoodRides Dream Girl, who sold for $21,500, and GoodRides Cover Girl, who sold for $19,500. Gower says that she has a few nice prospects by Boss that will hit the show ring soon. One is a two-year-old gelding out of Roll Out The Red Carpet. Brenda also has two yearlings, one out of her proven mare, She Made It Happen, and the other yearling is out of the famous Cool Krymsun Lady. “She’s drop-dead gorgeous and has phenomenal movement. We are very excited for her future.”

CLICK HERE to view the February Issue of GoMag

The deadline for the March Spring Shows issue of GoMag is Monday, February 28th. To reserve your space, call or text Suzannah Fuhrman, GoHorseShow’s Co-founder and Executive Vice President at 214-449-8716 or email her at Suzannah@GoHorseShow.com. She will be happy to answer any of your questions and can help design an advertising package to fit your needs and budget perfectly. GoHorseShow…Where The Winners Go.